My main activity at the moment is unearthing my modelling equipment and old projects from under all the junk that has built up in my attic 'man cave' over the past two years!

Unfortunately, it seems like my toy soldier projects are right at the back of my mountain of crap! 😂

So, in the meantime, a lot of my Molatero work is just sorting and planning. That said, I do have a couple of actual crafting idea I would like to get on with as soon as possible...

The first is another little plane. Having done a couple of bi-planes I would love to do an early 1930s period 'racer' monoplane.I think that would look quite cool (excuse my dodgy doodles)... 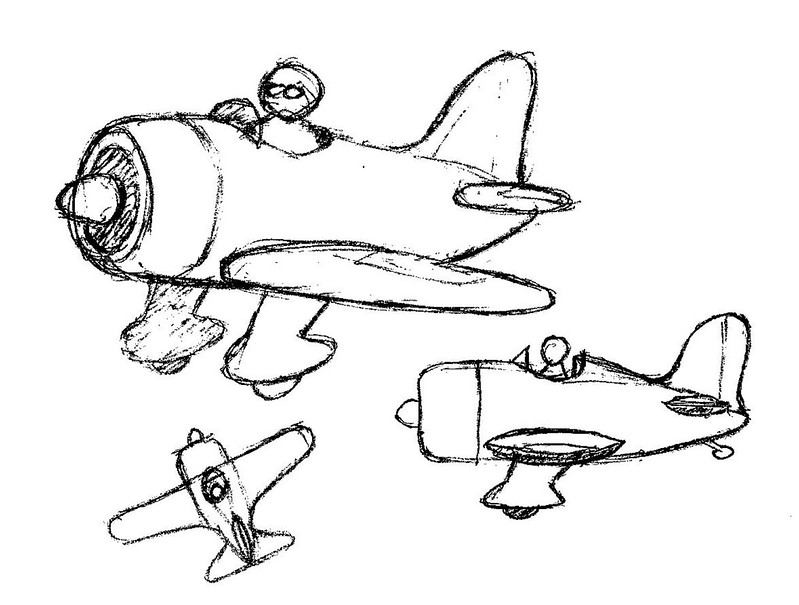 Next, I want to experiment a bit with doing a peg figure that has arms. So far I have mainly painted on my peg soldier's arms, so I'd like to see what I can do with some pieces of lolly sticks just to make my figures a little more 3D... 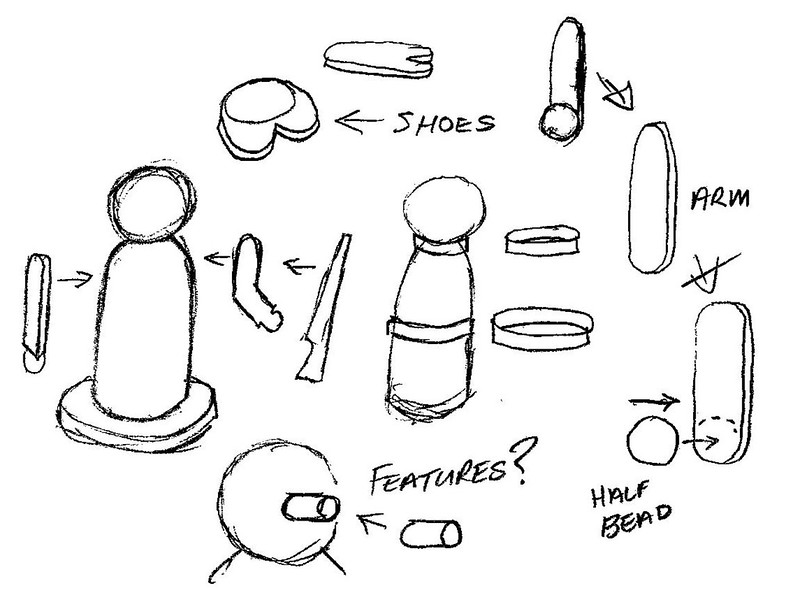 I have done one pair of figures that had appendages, my two mini-peg figures and they had 'hands' of sorts...

So it would be interesting to follow this development of my technique and see what the bigger versions would look like and what pros and cons there are to adding arms.

And finally, still thinking along the lines of my little planes, I'd also like to explore a third peg scale. That is what I am calling my 'bead scale', as you will note that the little pilots of my bi-planes where simply small wooden beads.

Yeah, pretty tiny, but I'm curious - I'd also like to do more vehicles using the 'bead scale'. I have already done my little racing cars, but I'd like to use the same general technique to do some military vehicles as well.

So, there you go, actually several ideas there (not just two as I originally thought). HOWEVER, the one caveat is me being able to clear enough space on my work bench so I can use my power tool, particularly my fret saw and my circular sander. 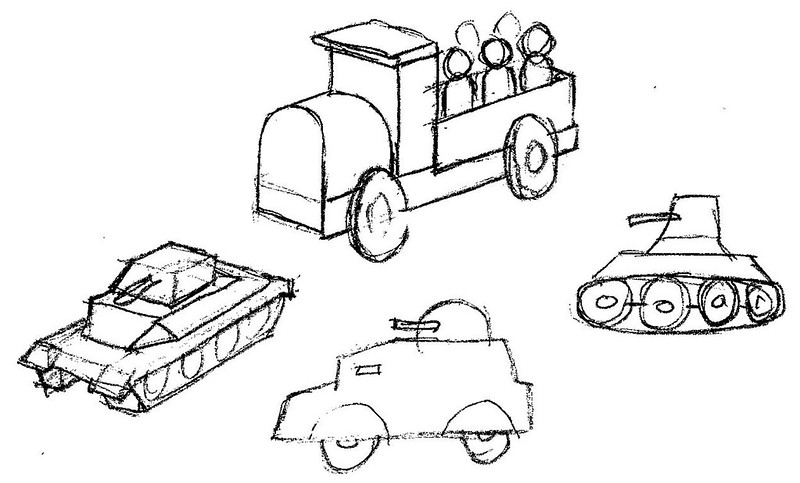 I had a couple of very interesting comments in response to my post about trees (and general scenery) for my peg soldiers were I to use them in a tabletop game. Joppy and jFidz, many thanks...

The upshot is - concerning a general style that would compliment my wooden toy soldiers - do I go 'full toy town' or not???

What I mean by that is; rather than model scenery in the traditional war-gaming fashion - i.e. semi-realistic - do I commit to adopting a completely wooden toy theme and add traditional wooden building blocks as scenery items? Blocks like these... 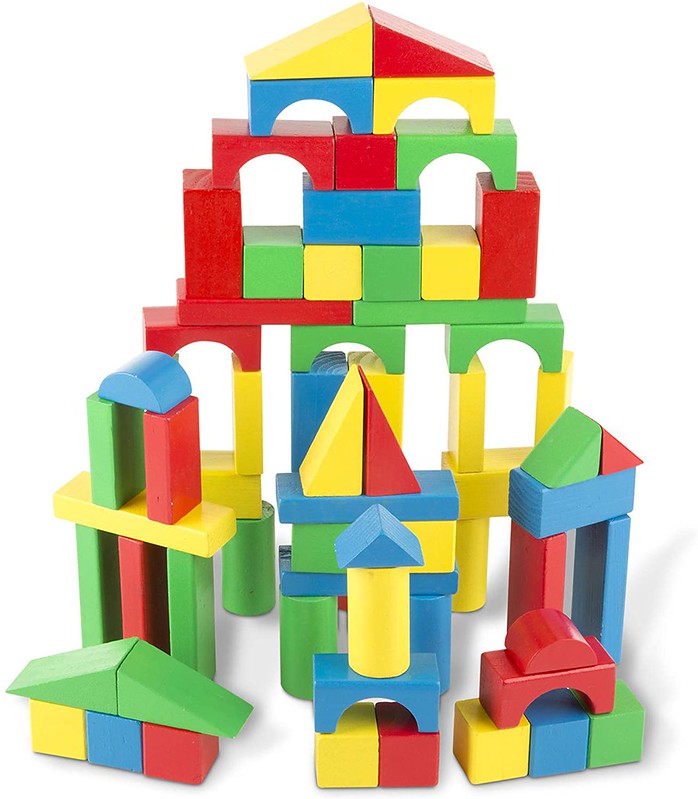 Now, there are pros and cons to this style. The major con might be - although my peg soldiers are simplified are they still too detailed caricatures to be considered to match the minimalist toy block style?

On the other hand, adopting the toy blocks as scenery is really flexible, I could make almost any piece of scenery really quickly and cheaply using these blocks. The above pictured set is 100 pieces for just £13! I reckon I'd get a small town or castle out of that and still have some 'scatter' scenery left over. 😊

Now I've started making peg soldiers again - and so rekindled the idea of doing FLW games using them - my mind turned to scenery and accessories for the 'battlefield.

Obviously, I want things to have the same 'toy town' look soldiers and this reminded me that I had seen some thing like this done before. All the way back in 2013, Tom Gow invited me over to Sheffield to the Tripples war gaming convention and one of the tables that really caught my eye was by a club who had done a wonderful little 'toy town' themed display... 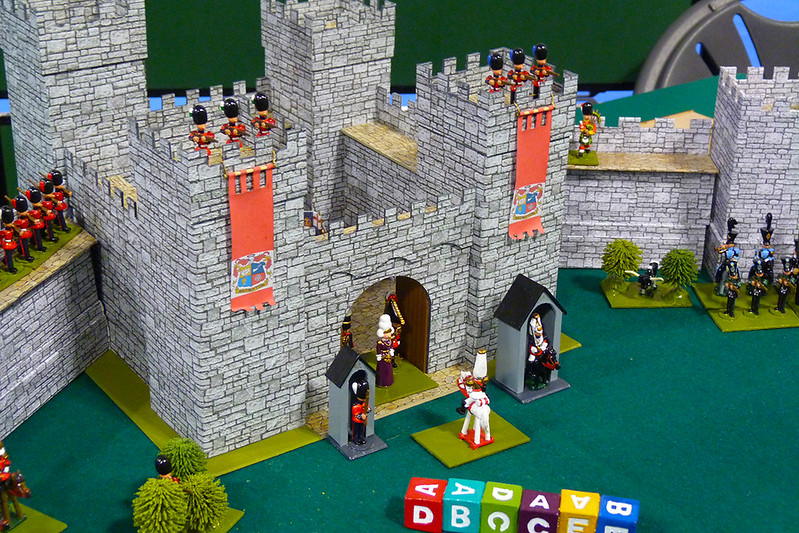 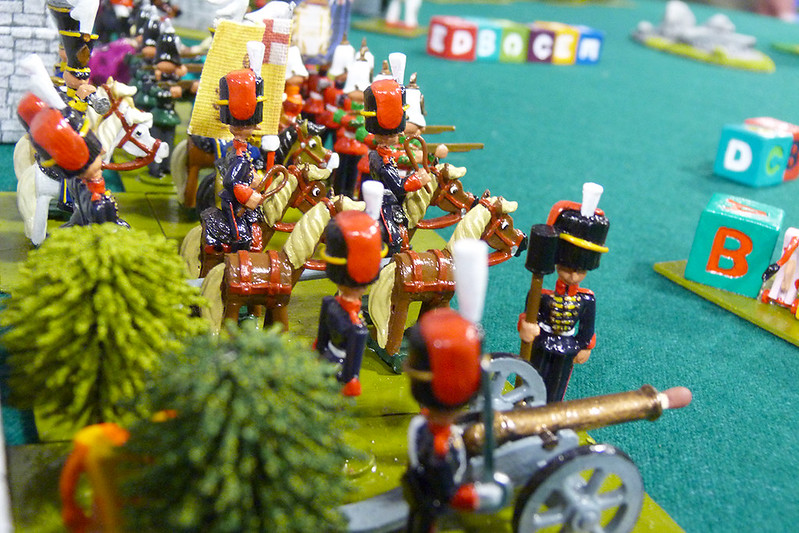 Now, the soldiers on this table (and I apologise, I have forgotten the name of the club that put this on) were commercially available models and although I quite liked the shaggy little trees that they had used I remember thinking at the time that they weren't quite right. (In my opinion.)

What I had in mind was a simpler design that complimented the caricatured 'naive' style of my toy soldiers. Something more like these designs... 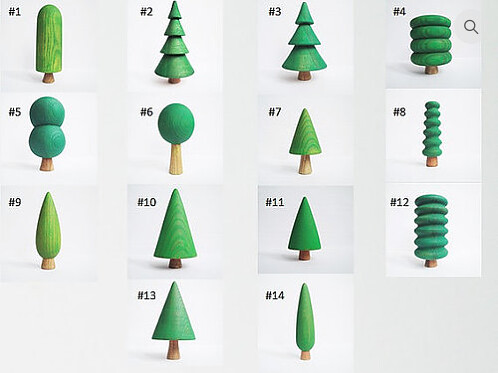 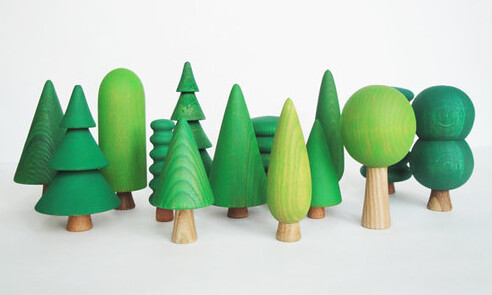 So, I was discussing this idea with my brother and he informed me that he had a lathe and that such designs might be easy enough to turn in wood! Score! :)

...BUT, we would have to work out a suitable size for the toy trees that was in proportion with my peg soldiers (he, by the way, is working on a similar project but based on little people for his granddaughter to play with). So I got to doodling a few outlines in various sizes on paper and eventually developed my sketches down to this design...

As you can see, what I have gone is a sort of cartoon proportion not much bigger than my figure itself (whereas, in reality, these trees should be something like double the height). This is based on what I think might look 'correct' on a tabletop, and taller trees might be in danger of overwhelming the look of the whole thing! (I know what I mean, I'm just not very good at explaining what I mean!)

So, I've sent this diagram up to my brother to see what he thinks and for him to maybe try turning a prototype on his lathe. Then we can actually set the toy tree next to a few peg soldiers to see if it looks right. Fingers crossed.

And What About...?
That sorted, it then begs the question - what about other accessories and scenery? What about houses or vehicles, etc, etc...

Er, well, the short answer is that I haven't thought that far ahead yet. Well, other than my 'peg planes' which I have deliberately created in a reduced scale as a matching scale to my 50mm soldiers would mean that the aircraft would be quite huge! 😀

I'll take each new idea on as it comes along. Let's get the trees and maybe some bushes done first.
Posted by Beaty at 11:18 2 comments:

Backstory: "After the upheaval of The Great War many sections of ordinary Molaterian society
were in ferment due to their dissatisfaction with the ruling elite and their military support for the Northern Alliance. The cost of that affiliation for the ordinary populous was great, particularly on the agrarian working classes who were relied upon to fill the ranks of the army during the war.

Liberal dissatisfaction with minimal representation in a parliament that was still overwhelmingly dominated by the aristocracy was bolstered by a growing proletariat movement. What started as a demand for political reform quickly became an actively militant anti-monarchist and anti-government sedition.

With outside support, an armed resistance movement was formed to counter what was an increasingly draconian suppression by the Royalist Army. Rural areas quickly fell to various anti-government militias and regional regiments - who were largely made up of conscripts - and in 1920 descent turned into full-blown revolution.

This plane represents one of the handful of aircraft the revolutionary coalition managed to put into the air in support of its military campaign. What aircraft the rebels had were largely obsolete models left over from the Great War and were no match for the more up-to-date machines of the Royalist Air Force." 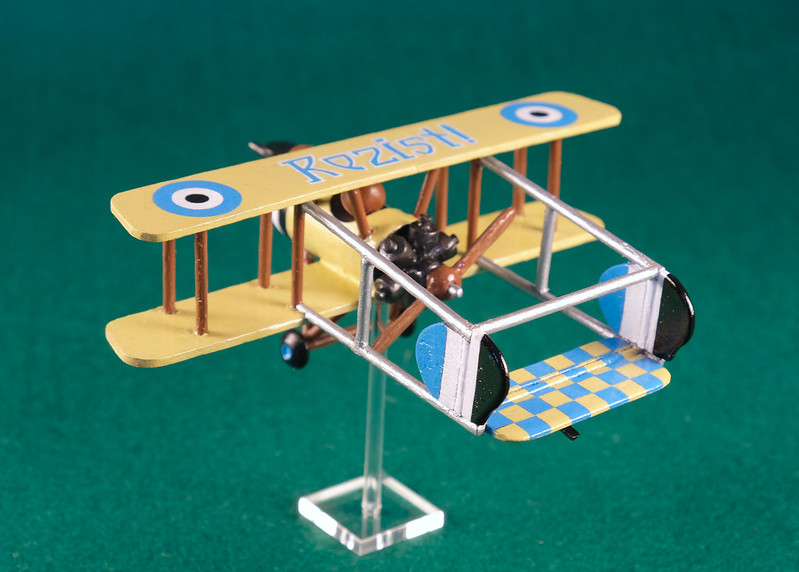 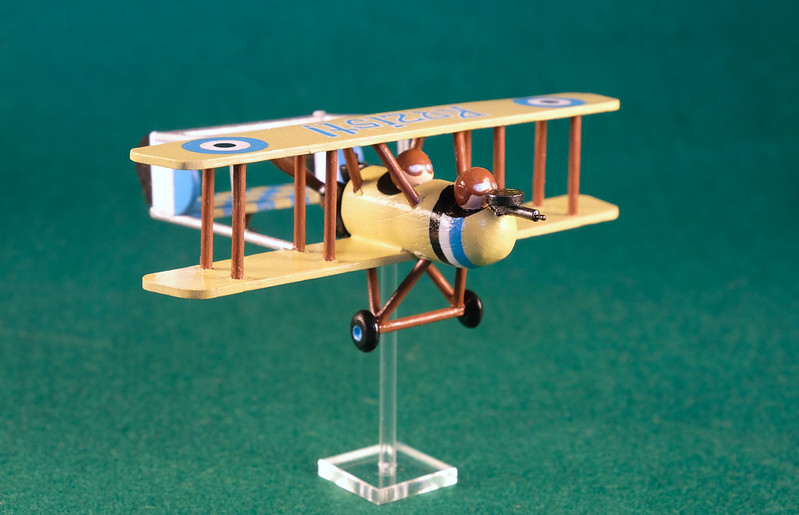 Model information: This is the second of my 'peg' aircraft models. In this case, the peg - or part of the peg - forms the main fuselage, with the other wooden parts made up from cocktail sticks, lolly sticks (popsicle sticks for our colonial cousins), wooden beads and tongue depressors (of all things)!
Posted by Beaty at 19:29 No comments:

I'm (very) slowly working on my Molatero backstory and maps in the background, but I have made some progress and am happy that I have the basic geographic shapes finalised... 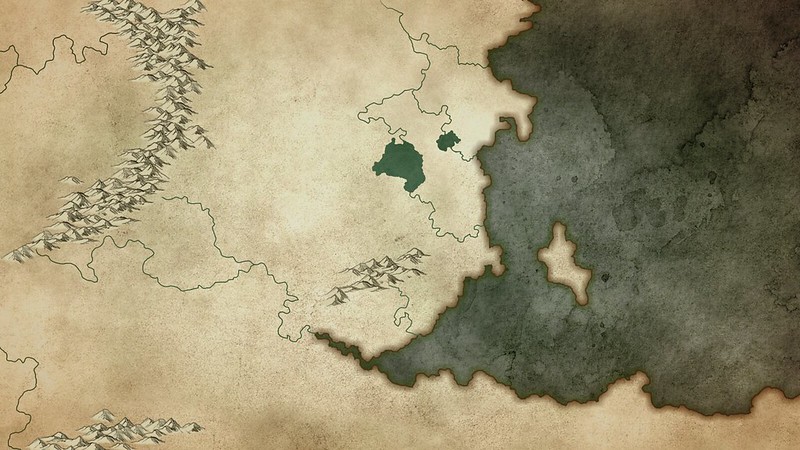 I'm also please with the graphics style, even if it does look a little Lord of the Rings meets Pirates of the Caribbean! 😂

Now I have the base outline I can start work on making a pictorial history of Molatero using maps which trace it's formation and development. I'll use these to pin-point important periods in the county's history so that I can give my story some character. 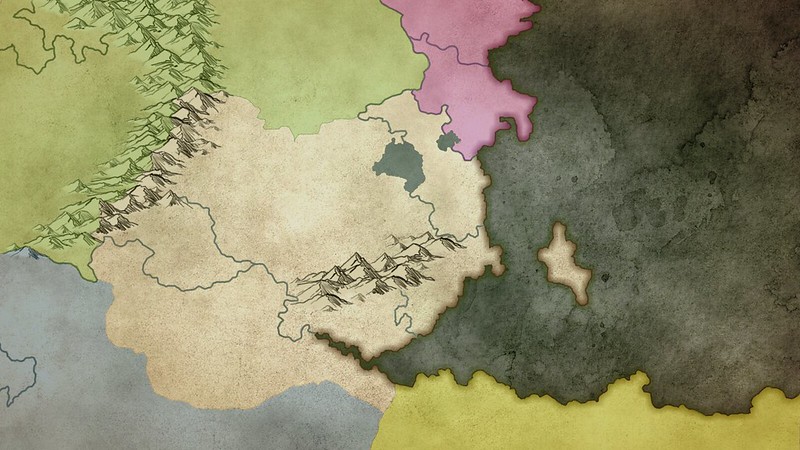 As I say - this is a small update but I'm enjoying creating the maps.
Posted by Beaty at 15:20 No comments: